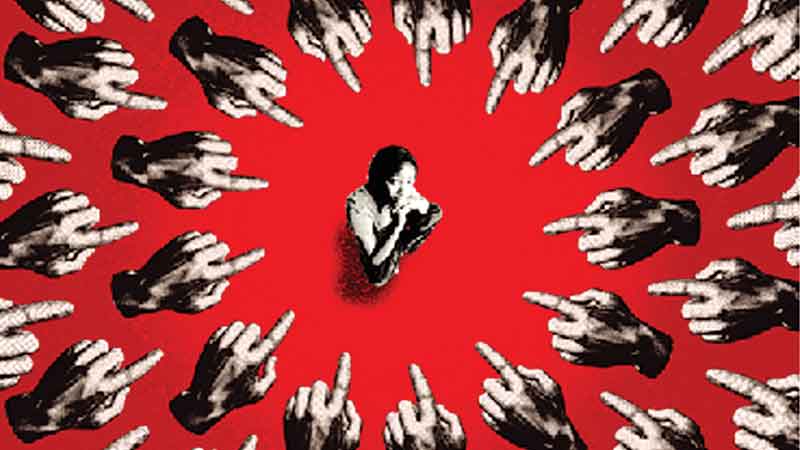 According to Ain o Salish Kendra, this year, from April to August, a total of 632 incidents of rape took place. This means within the last five months, on average, four women were raped every day.[1] Surprisingly enough, each time, the law and enforcement agencies remained deaf and dumb till the recurring rape incidents went viral and made it to the headlines. According to the data, from the government’s One-Stop Crisis Centre, from 2001 to July 2020, only 3.56 percent of cases filed under the ‘Prevention of Oppression against Women and Children Act, 2000’ has resulted in a court judgment, and only 0.37 percent of cases have ended with convictions. “Arioch” a local women’s rights organization, examined the incidents of reported rape cases in six districts between 2011 and 2018 and found that out of 4,372 cases, only five cases saw conviction.[2] This portrays how our judicial system has failed the rape victims. Recently, responding to the massive protest countrywide against the rapidly growing rape incidents, Women and Children Repression Prevention Bill 2020 was introduced in the parliament where the maximum punishment in rape cases is elevated to death from life imprisonment. But the question of effective application of this law remains.

Besides the lack of proper disposal of rape cases, victim-blaming has played a significant role in the growth of rape culture in our country. Due to the notorious Section 155(4) of the Evidence Act, 1872, ‘victim-blaming’ is legally justified to some extent.

The Evidence Act, 1872, favors rapists and supports “victim-blaming” indirectly with this massive loophole. In this Act, particularly, section 155(4) states that “when a man is prosecuted for rape or an attempt to ravish, it may be shown that the prosecutrix (victim) was generally of immoral character.” [3] This Act gives the accused an upper hand. But the determination of consent has nothing to do with one’s character and history of sex life. When stating the word “immoral character”, the Act does not define the exact criteria for determining a person’s immorality. Thus, the defense lawyers get to question the victim, more often on facts that seldom has to do with the case at hand. In a rape case, where the actual concern is about “consent”, the defense lawyer tries to change the case’s direction using the aspect of the victim’s character. Later, if it is proved anyhow that the victim is of immoral character, the accused is often set free. This results in complete humiliation for the victim. The matter of wonder is, even after such a loophole, this provision still prevails from the British period, whereas it should have been repealed long ago.

In fact, a lot of judgments are already given under this provision. In a judgment, all seven accused of gang-raping a 13-year-old girl were acquitted. The court took into consideration the girl’s “romantic” relationship with one of the accused.[4] In the case of State vs. Sri Pint Pal, filed in 2010 under the Women and Child Repression Prevention Act 2000, the accused was acquitted as the complainant was a domestic help and considered to be of “easy virtue”.[5] The judgment read, “The plaintiff woman is of easy virtue, so her dignity is low. As a result, the court did not find any clear evidence to place their trust on the accusation brought by this woman of easy virtue.”[6] In the case of State vs. Abdul Majid, where her neighbor in her own house raped a divorcee with one child, the judgment read, “The plaintiff is habituated to sex, so it was not possible to obtain any evidence of rape. The victim is of ‘immoral’ character and is involved in different unsocial and unethical activities.” The accused was acquitted.[7] All the judgment has proven repeatedly that this provision should come under critical evaluation and is defective.

This issue has been raised several times, and the Law Commission drafted a new Evidence Act, repealing this provision 155(4), but that is yet to be accepted by the parliament (at the time of the writing). So, it means the previous provision is still effective, and the problem is not resolved from the root.

In this provision, the loophole is the absence of a strict definition of the term “immoral character”. If the lawyer proves that the victim is of “immoral character” or of “easy virtue”, the accused is often released. So, this vague term should be dealt with a strict definition in mind because a victim’s sex life does not excuse rape. From the definition of rape[8] we get to know that this terminology revolves around the concept of “consent.” It has no relation to the fact of whether the victim was a virgin or sexually active. But Sec 155(4) opens an opportunity for the ground to rape someone who is not a virgin. And later, using the vague term of “immoral character,” the accused often escapes punishment. As stated before, there has been a newly drafted Evidence Act by the Law Commission that excludes this provision for its vague nature. But as it has not been approved by the parliament yet, provision 155(4) is still in action. Because of this provision’s vague nature, there is a massive possibility of denial of justice and humiliation in public for the victim. Such a situation will only discourage other victims from choosing the path of litigation as they will already lose their faith in the judicial system. So, either the newly drafted Act should be approved as soon as possible, or there should be an amendment to the existing law where a proper definition of “immoral character” is set. So that justice may not depend on mere interpretation, and there should be no “victim-blaming” by the misuse of this particular provision.

In a country like Bangladesh, where stereotypes are oppressing girls, it is dangerous and wrong for such a law to prevail. There is no denying that rape is a complete violation of the term “consent” and the violator undoubtedly needs to be punished. But Section 155(4) not only keeps an open door for injustice but also welcomes victim-blaming. It is high time we changed such a law, which creates even the slightest possibility of injustice toward any rape victim. Thus, either this particular provision has to be repealed immediately, or there should be an amendment to the existing loopholes as soon as possible.

[1] 4 women raped every day on average in Bangladesh amid Covid-19 pandemic, at https://www.dhakatribune.com/bangladesh/2020/09/29/4-women-raped-every-day-on-average-during-coronavirus-pandemic, last accessed on 1 December 2020.

[4] Evidence Act too chaste for prosecuting rapists, at http://www.thedailystar.net/city/evidence-act-too-chaste-prosecute-rapists-1235023,last accessed on 1 December 2020.