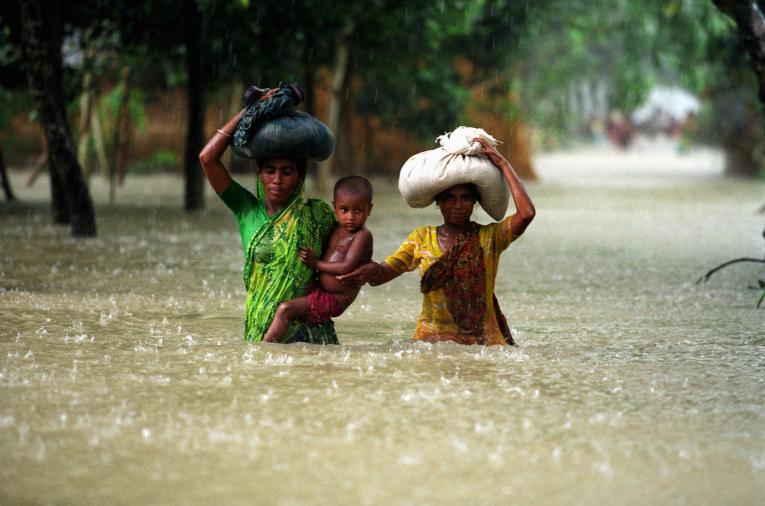 SOME CONCERNS OVER CLIMATE CHANGE: BANGLADESH AS A SUFFERER

Climate Change has become a burning issue in the twenty-first century. Long-term change in the statistical distribution of weather patterns over long periods causes climate change. Due to significant fluctuations in global average temperature, the earth’s climate is gradually changing. One of the significant contributors to climate change is carbon emission. Usually, developed countries are predominantly responsible for carbon emission due to their excessive use of fossil fuel and greenhouse gas emissions and other triggering issues. According to the Centre for Global Development, developed countries are responsible for 79% of historical carbon emissions.[i] As a result, developing countries like Bangladesh are the sufferers of these carbon emissions and global warming.

Though Bangladesh is trying its best to combat carbon emission, due to some developed countries’ recklessness, she has to bear the tragic consequences of such emission. Some of the countries which contribute the most in carbon emission are- China, the USA, India, Russia, Japan, Australia and Canada. Many international conventions and protocols fail due to the unwise actions of these countries.

The Paris Agreement aimed to keep the global temperature rise below 2 degrees Celsius in the 21st century. It was called historic since all the countries agreed upon it, but the reality is not that promising.[ii] This agreement started to go downhill when the US backed out of it in 2016, and other developed countries did not demonstrate any solidarity towards that commitment.

The Kyoto Protocol aimed at reducing GHG emission. It failed as it did not encompass many developing countries like China. The 1987 Montreal Protocol is one of the most successful agreements which is universally ratified. This protocol was adopted in the Vienna Convention to protect the ozone layer. Furthermore, it was successful until the recent abrupt rise in the emission of CFC-11 in Eastern Asia, which has resulted in a harmful effect on the ozone layer, which is a violation of this protocol.[iii] So, we can see not all developed countries comply with such conventions.

In Customary International law, there is a principle called the no-harm rule, where a state is bound to prevent, reduce and control the risk of environmental harm to other states. Trail Smelter case of 1937 between Canada and the USA held that a state needs to protect another state against individuals’ harmful acts.[iv] According to a Foundation for International Environmental Law and Development (FIELD) report, small island nations and other threatened countries have the right to pursue an inter-state case before the UN’s International Court of Justice. However, it faced many backlashes with uncertain reactions from developed countries.[v] There can be a possibility of developed countries withdrawing foreign assistance as a reaction to a lawsuit.

Thus the developing countries like Bangladesh have to bear the consequences of such. Bangladesh has ranked 6th on the Global Climate Rate Index 2020[vii]. Also, Bangladesh is the 33rd most vulnerable country and the 25th least ready country for climate change.[viii] According to WRI 2017, Bangladesh contributes less than 0.36% of the total global emission, yet our country is the one to pay the price.[ix] Due to the increase in sea level, many areas along the coastal region are flooding away. Almost 35 million people, represent 29% of the population lives along the coastal region if the sea level rises at this rate. Most coastal areas will go down undersea waters, causing native people to lose their homeland.

According to World Bank Data, the Carbon Emission of Bangladesh is 0.47 metric tons, which does not oblige Bangladesh to reduce carbon emission by any International Conventions since the per capita emission is insignificant compared to other developed countries.[x] Still, Bangladesh has been trying to address carbon emissions by adopting different measures.

By mandate of article 18A of the Constitution of Bangladesh the state endeavors to protect and improve the environment for its citizens.[xi] In article 32, citizens’ right to life is ensured, legally covering the right to live in a safe and healthy environment.[xii] In Dr. Mohiuddin Farooque vs. Bangladesh, the court held that the right to life includes “decent and healthy living in a hygienic condition.”[xiii] Also, there are numerous policies adopted by Bangladesh to fight carbon emission. National Energy Framework works to ensure the security of energy and environmentally sound sustainable energy development programme. In Bangladesh Climate Change Strategy and Action Plan 2009, we see one of the six pillars is mitigation and low carbon development. This action plan aims to evolve low carbon development options and implement these as the country’s economy grows over the coming decades, and the demand for energy increases. Bangladesh has ratified the Kyoto protocol in 2013, which aims to reduce Green House Gas (GHG) emission.[xiv]

Apart from that, some further steps may be adopted by Bangladesh to mitigate carbon emission. To reduce the negative externalities of carbon emission, carbon tax can play a huge role since fossil fuel energy consumption is increasing in Bangladesh. Carbon tax aims to reduce the consumption of carbon-intensive fuels and encourage consumers to turn to clean energy. To reduce carbon emission dependence on renewable energy is a must. Only 4 out of 42 renewable projects have been implemented since 2014 in Bangladesh.[xv] Solar power and hydropower are the primary sources of renewable energy in this country. Only 2.92% of power comes from renewable energy, where the target is 10%.[xvi] The government is trying to overcome this deficit.

Everyone deserves a safe environment. Violation of environmental laws is a violation of human rights. Thus, by violating International Conventions and Treaties, developed countries are hindering the people of affected countries’ human rights. Developed countries should be strictly obliged by International instruments to reduce carbon emission. Apart from that, the developing countries should be entitled to monetary compensation for the loss incurred by them.

[i] Developed Countries Are Responsible for 79 Percent of Historical Carbon Emissions at www.cgdev.org/media/who-caused-climate-change-historically, last visited on November 24, 2020

[x] Second National Communication of Bangladesh to the UNFCC (published in October 2012), Ministry of Environment and Forest, Government of the People’s Republic of Bangladesh, Chapter 3 at www.unfccc.int/resource/docs/natc/bgdnc2.pdf, last visited on November 24, 2020

Student of Faculty of Law, University of Chittagong.