‘Mooting is a competition with fine and the grilling helps in building up great oratory skills that develop confidence in your ability as advocate.’ I was told to write my experience about my mooting at GNLU. So, here I am to share my first mooting experience!

Being a law student, I was always wanted to be on that particular podium to present my case. At the same time, I was always afraid of preparing memorial, for me which happen to be the most hazardous task to be a mooter! With those fear it takes four long years to be on that podium. But this was not any intra or national mooting. I got my opportunity straight to an international mooting competition.

The team was comprised with three members which was Debjuty Dhar, Shafin Shoib and me. Since, academic exam was going on, we were asked to finish our memorial without Shafin. The thing is, I and Debjuty, we both was novice for mooting and we had hardly any idea about memorial.  Although, we both did some public speaking before, but mooting is not the same as public speaking for its application. Fortunately, we got our beloved Piyal vai, Jahed, Taif and Imran as our instructor. We had our group discussion about the fact, which seems to be most tricky fact. They instruct us with their best and allotted our work where Jahed was also helped with his reasoning.

But it was memorial; the process could not be so smooth! As many as we were going through the fact, it felt like, we were in a dead end.  The first problem we faced was that, where to start and how to start.  Again, we took help from Jahed and somehow gathered courage to start our memorial. This took nearly five days to start preparing our memorial and we had thirteen days to finish our memorial with nine issues which supposed to have more sub-issues.  With such drawbacks, we started working on our memorial with our instructor. Despite of working so hard for this memorial we were sure that we would not be able to submit it by the deadline which was 13th January. Here Taif made a smart move. He sent a mail to the organizing body regarding our problem. The body considered our problem and extends the date for the submission. They called me to confirm our date extension and said it very clearly that we could submit when it finished.  For that time being, we had our memorial partially prepared and hoping to go through it to another time with our team-mate Shafin as he was not involve with this memorial and to address loophole if there was any. I got an email stating that we must submit our memorial by 17th  January memorial and failure to submission would cause number deduction.  I was flabbergasted with that email because we had only one day to assemble the whole memorial and to revise it as well. So, on 17th January, I and Debjuty, Abishek, Tusher and Shafin were set together to prepare our list of abbreviations and request for finding. After finishing this memorial, we had Taif to put the page number and submit it. By the next morning we had our memorial submitted.

So, now the submission stage, where we supposed to present our case with two orators and a researcher. But for visa issue Shafin could not make it to the Gujarat which denotes that one of us had to be researcher and orator at the same time. I became the researcher and the orator.  On our first submission we had a Kenyan team as our opponent. Before the trial we had a chat with them and they deemed to be highly confident about their preparation.  On our first submission, we were presenting our claimant.  Debjuty was the first orator. As soon as he started his submission, and as the adjudicator started to questioning him, we got to realize that we made a silly, which resulted as huge mistake later, on our memorial and at some point we were giving some suicidal submission without even knowing. On the other hand, our opponent took that opportunity and made their presentation clear, but they altered the fact according to their submission. After the trial, we both team knew that mistake was there from both side but it was up to the honorable adjudicator to give their verdict. In that night, we had consulted to Jahed to redeem ourselves in the next day’s submission. I and Debjuty discussed over it and made our script as a respondent. This time one bravest thing we did in our script that, we just noted down our key point to make eye contact with the judges and had very clear thought what was we going to present.  On the submission day, we had an Indian team as claimant not to mention that they were the experienced mooters. Sharing with them our last day’s experience, they told us that they had the same experience. On the trail, they started their submission, but after certain time the judges got so confused that they took nearly fifteen minutes extra to make themselves clear with their presentation. Watching them in such condition we had our confidence back as we know what we supposed to do. Taking consideration of the failure of opponent, we made our Judges to understand why we had better claim then them. On that day we both realize that we had our best presentation by far.  On 15th February, after having our dinner we had our result, and as we predict we lost in one round in two preliminary rounds. In spite of that we hold position 26th among 56 teams of different country. The result was heartbroken and inspirational at the same time. It was heartbroken because we lost it over a silly mistake and inspirational because before this mooting we both had barely any idea about mooting but we had a break with an Indian team.

After this whole mooting experience I realize certain things, where we must work on regularly. Firstly, have a team to make memorial in time with instructor. Secondly, clear visa process as early as possible and lastly, grab every opportunity of mooting because you never know in next mooting you might present SCLS as an orator or a researcher. 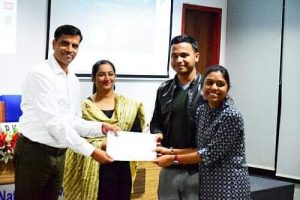