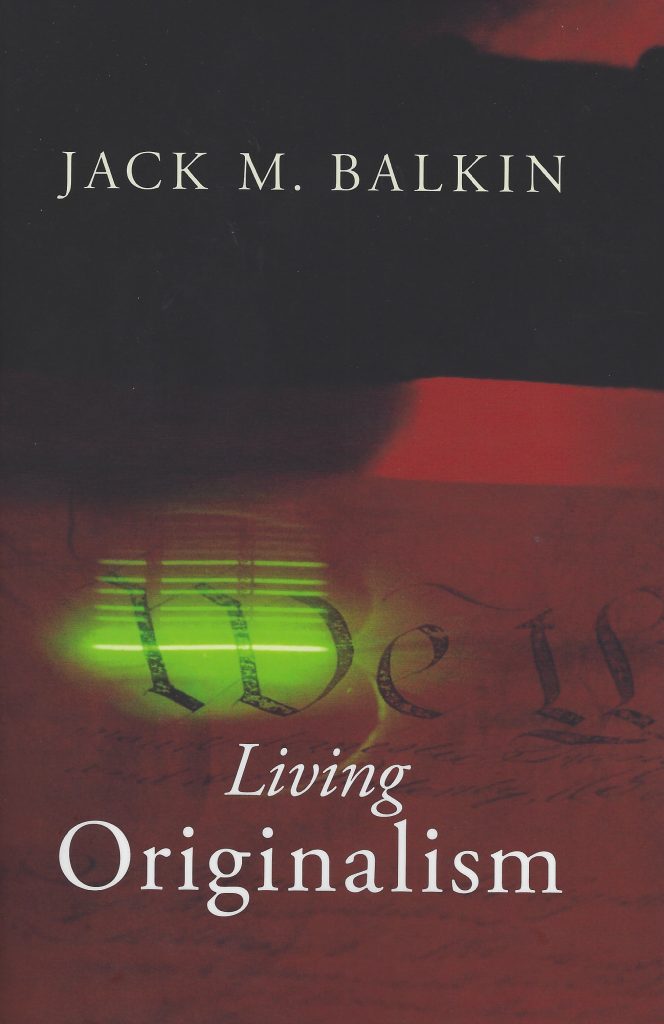 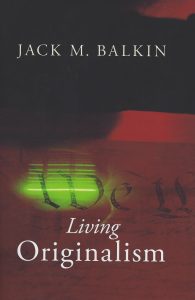 “American constitutional interpretation generally divides into two rival theories. The first, originalism, contends that the Constitution should be read in light of the intent or original meaning of its framers at the time it was constructed. The second, living constitutionalism, encourages judges to read the document in light of contemporary understandings and society. According to Balkin, both theories are controversial, have partisan adherents, and are deficient in that they fail to capture how the Constitution must be read within the context of American democracy and the broader role that not just the courts but also the other branches of government and citizens have in giving meaning to it. Balkin offers a powerful theory that clarifies originalism and living constitutionalism, constructing a theory of living originalism that brings the two together. Balkin articulates a theory about how constitutions have basic meanings that are particularly applied in and over time, showing how text, intent, and meaning can provide both a framework for democracy and a guide for how judges should approach specific issues such as equal protection.”

Jack M Balkin does not claim to be a living constitutionalist. In “Living Originalism” he maintains, by all means, that he is faithful to the “original project” and merely seeking to distant himself from the “conservative originalists.” Unfortunately, a close reading of his “Framework Originalism” coupled with his “Method of Text and Principle,” led me to an altogether different conclusion. He is no less a living constitutionalist than the others, though he unsuccessfully seeks to hide behind a curious version of originalism. To me, he is a living constitutionalist in disguise. Since Balkin would not like such a straight forward branding, I must explain why. First of all, let us see what Balkin offers.

Framework Orginialism and the Method of Text and Principle

To put it simply, Balkin believes that one could be a living constitutionalist and an originalist at the same time. He asserts that the framers crafted an original framework of politics to which we must remain faithful and on which we must rely. However, we can constantly build upon the original project to make it “ours” through a method of interpretation named the Method of Text and Principle. When laying foundation stones of the original project, the framers chose to use both texts (which are clear and where we have little to temper with) and principles (which are often general and vague and where we can “construct”). My initial reaction to this was positive of course. Had the theory ended here, I would admit that Balkin is neither an originalist simplicitier nor a living constitutionalist in disguise. He is what he professes – a living originalist in the true sense of the term.

But Balkin goes further and seeks to temper, not a little, with the texts to trace out some principles that may “underlie” those otherwise unambiguous and clear texts. Once the “underlying principle” is discovered (not necessarily through the literature of founding generation, rather through the literature of successive generations of political actors, lawyers, judges and scholars), we no longer remain bound by the understanding, construction and expectation of the founding generation (p 57). At least, “fidelity” does not require us to be bound, Balkin says. If this is called “fidelity”, then what “fidelity” actually is?

Balkin would spare the “unambiguous, concrete and specific rules” (35 years age requirement for presidency, for example) only. Do the living constitutionalists do otherwise? In all other cases, Balkin would ignore even the semantic meaning of clear words and remove the carpet to see whether words are used “literally” or not (p 204). Here again he would not be confined to the original intention or expectation of the framers. He would try to find out some further explanatory or supplementing principles (apart from the already discovered underlying ones) which “no single individual or generation intended” (p 262). If this is “originalism,” then what “originalism” actually is? If this is not “living constitutionalism,” then what “living constitutionalism” actually is not?

How the Method of Text and Principle works

In Part II of Living Orginalism, Balkin illustrated how his method of text and principle actually works. Let us take Balkin’s experiment with the Second Amendment right to bear arms.

Right to Bear Arms may be read either as embodying a civic republican idea that seeks to prevent potential federal tyranny by maintaining independent state militia. Secondly, it may accommodate an individual right to self defense (p 206). The structural arrangements of early federalism (with express mention of the word “militia” in the clause) make it plausible that the framers actually intended this as a civic republican guarantee. Seen in this light, the right ought to have lost much of its significance in modern day structure of federalism. Therefore any modern justification of the Second Amendment right must rely on something else – which perhaps the framers did not intend. But the framers of the 14th amendment in 1868 took it for granted that this in fact was an individual guarantee of self defense (p 206). Again, the Supreme Court in Heller v. District of Columbia found that the ratifying generation actually sought to protect an individual right. How to solve the puzzle? Balkin’s Text and Principle would suggest not bothering much on what 1791 or 1868 generations intended or expected. Rather we should look for what actually makes sense today. Therefore a self defense reading of Second Amendment will not only be permissible but also consistent(!) with its text (p 207).

Precisely this is why I don’t feel that Balkin is anywhere near “originalism”. Had Balkin suggested that a self defense reading will be permissible in light of modern day understanding of the underlying principles of Second Amendment, I could have easily taken him as a living constitutionalist. Balkin won’t do that. He would rather pretend to be an “originalist” as well and forcefully make something “original” which it actually is not. Therefore I can’t help calling him a living constitutionalist in disguise.

Let us take a second one – the equality guarantee. Balkin relies on a tripartite theory of citizenship (p 222) which would entail guarantees of civil, political and social equality for all citizens. The framers of Bill of Rights however did not see this that way. They rather expected to constrain it within civil equality. Therefore women were taken as civil equals but considered “represented” by their husbands in social affairs and denied their political right to vote and practice law (referring Minor v. Happersett in p 224). Likewise, blacks may have been given political equality through Fifteenth Amendment (right to vote) but not social equality for sure (referring Pace v. Alabama and Plessy v. Furguson in p 225). Given the circumstance, how could we justify modern day precedents like Brown, Loving and sex equality cases?

Balkin seeks an answer in Framework Originalism and method of Text and Principle: “We must decide in the present which constructions are most faithful to the text; history cannot decide this question for us” (p 229). This is unmistakably a living constitutionalist argument. Yet again, in the very next line, Balkin would invite “fidelity” to the original constitutional plan and claim that this curious version of fidelity would allow us a contemporary “choice” and bestow us a “responsibility” to embrace that choice.

My criticism of Balkin on meta-distinction between originalism and living constitutionalism should not, however, fail to note the deep appreciation I have for Balkin’s success in explaining the extra canonical changes in the U.S. constitutional landscape that has happened as a matter of fact. The rise of administrative state, New Deal legacy of regulatory federalism, second reconstruction through civil rights movement and sexual revolution must have a place within “our” constitutional project. Any “faint-hearted” theory of construction seeking to accommodate these “mistakes” (p 8) as part of some reluctant concessions would cause significant instability within the project “We the people” have faith in and rely on. Balkin’s flowing theory of constitutional construction would allow the present generation a breathing space and the future generations a hope. My point is that Jack M. Balkin need not pretend to be an “originalist” for giving us the desired space and hope.

[Some pages of the book Living Constitutionalism is available for preview at: https://books.google.com.hk/books?id=khidNUWpY8UC&printsec=frontcover&dq=Jack+M+balkin&hl=en&sa=X&ved=0ahUKEwimyqPv5MraAhVIurwKHV6wBVgQ6AEIJTAA#v=onepage&q=Jack%20M%20balkin&f=false]

The author is an Assistant Professor of Law at University of Chittagong & a Ph.D. Candidate (Legislative Studies) at King’s College London.